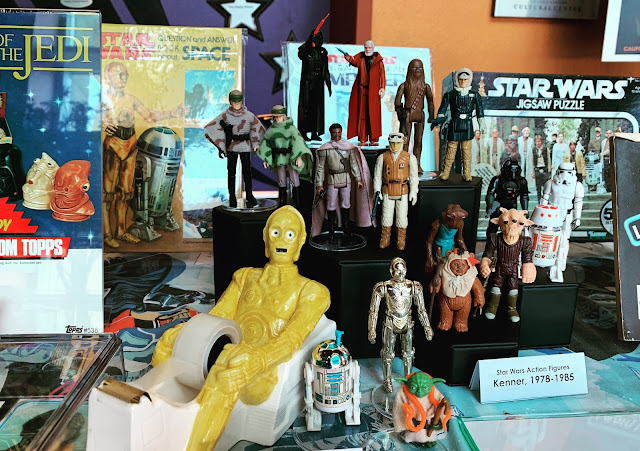 The club's 4th trip to Victoria Gardens for the Rancho Cucamonga Public Library's annual Star Wars day was another success, and on May 25th at that! Stationed in our traditional spot in the main lobby, the vintage display was incorporated into the queue (Q?) for some popular character photo ops this go around, which definitely brought increased traffic (and nostalgic remembrances) from passers-by. 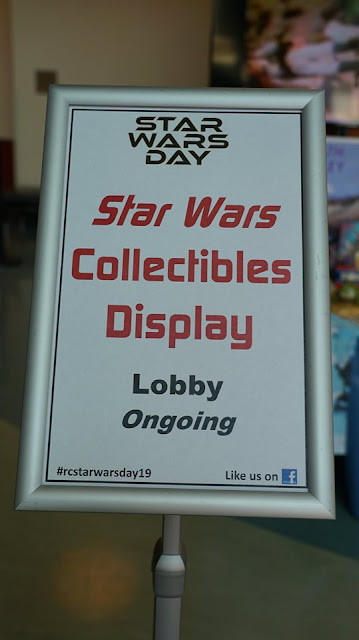 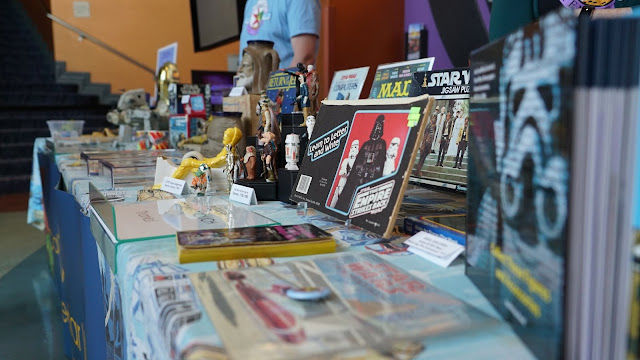 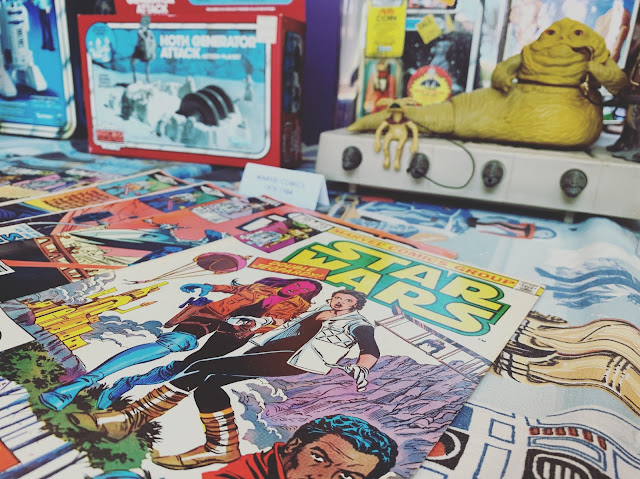 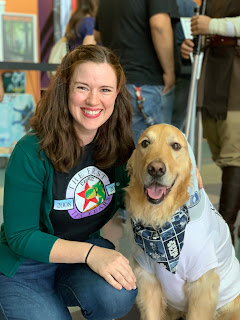 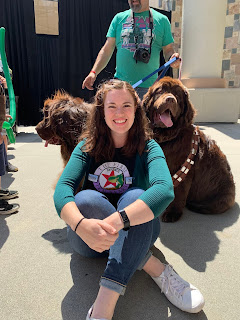 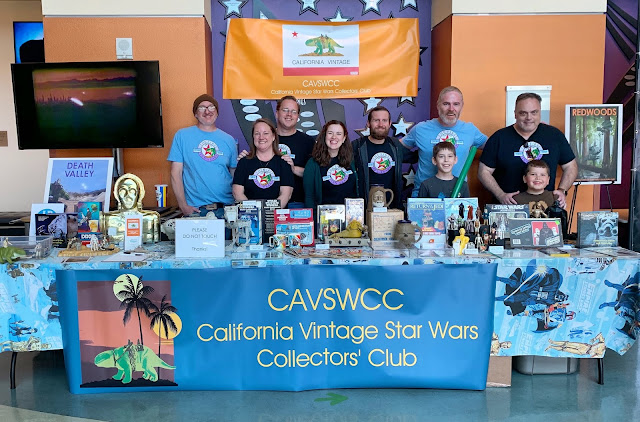 Thanks so much to Allen Callaci for inviting us back, to everyone that attended and helped out, and to Darren G. (unfortunately not there for the group photo) for capturing the event so well with his camera.
Posted by CAVSWCC at 10:43 AM 1 comment:

CAVSWCC at Celebration in the Windy City 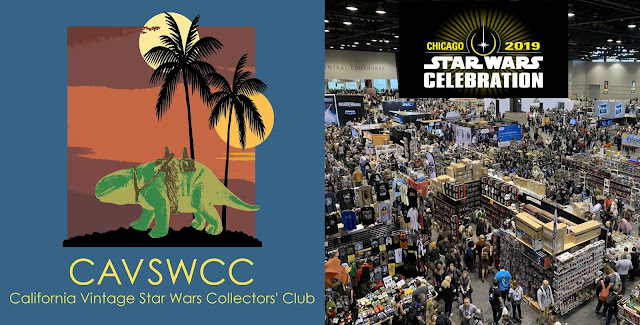 Nearly two months later and it still feels like we're in recovery mode (and maybe a bit of withdrawal) from Star Wars Celebration Chicago. This convention was a whirlwind and a whopping 5 days long, but it was an absolute blast. The club had a great contingent and official presence in the main hall for the first time since Celebration Anaheim 2015. Here's a quick photo recap for posterity!

Before the convention was upon us, a good deal of design work was undertaken by two of our most talented artists. One of the last minute challenges was the creation of a new alternate club logo. Barth Paine, the artist behind our original CA state flag themed emblem, ingeniously designed what he described as "In-N-Out meets Tatooine." Our trusty Dewback mascot remains true, as does our Golden State vibe. 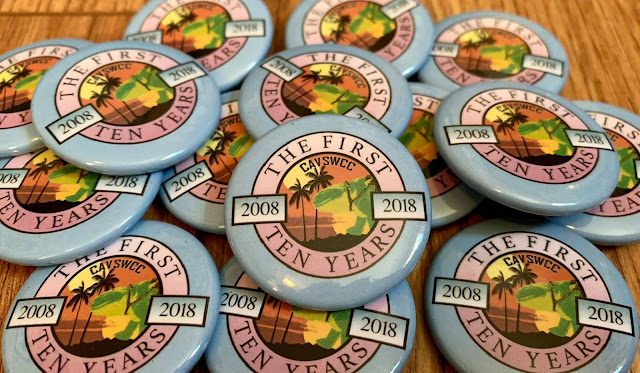 With the new logo locked, Ryan Savas got to work revamping our "First Ten Years" logo which manifested in the form of buttons that were handed out to thousands of convention-goers. 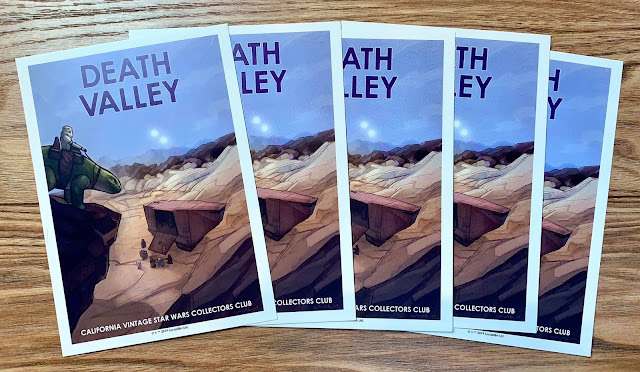 Also a huge hit were a pair of Vintage Star Wars/State Park themed travel postcards. Ryan crafted two incredible pieces of original artwork inspired by California filming locations from the Original Trilogy, integrating Kenner toys with locally significant environments, all the while perfectly capturing the aesthetic of the travel posters of yesteryear. The first design available for the initial days of Celebration featured our ever present Dewback overlooking a droid sale below in Death Valley/Tatooine. 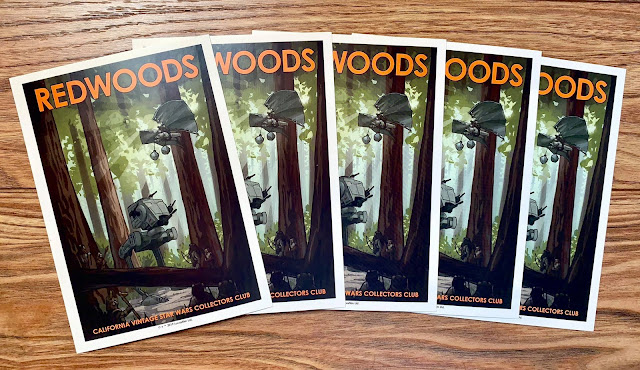 The second design, handed out over the second half of the convention showcased a stunning image of the California Redwoods overrun by Endor's finest. Below are some shots of the postcards on display along with some of their corresponding vintage toy ingredients. 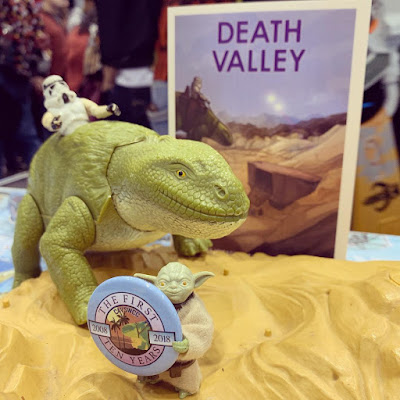 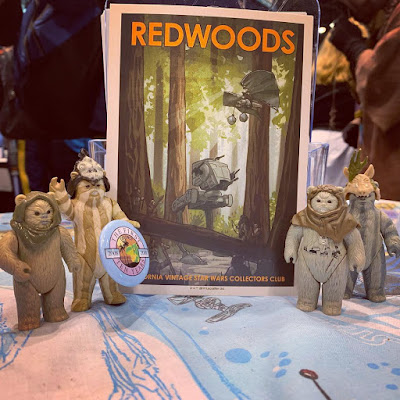 These postcards were immensely popular, particularly with some fans that also happened to work for the National Parks Service or had visited the filming locations depicted. Ryan definitely set a high bar with these! 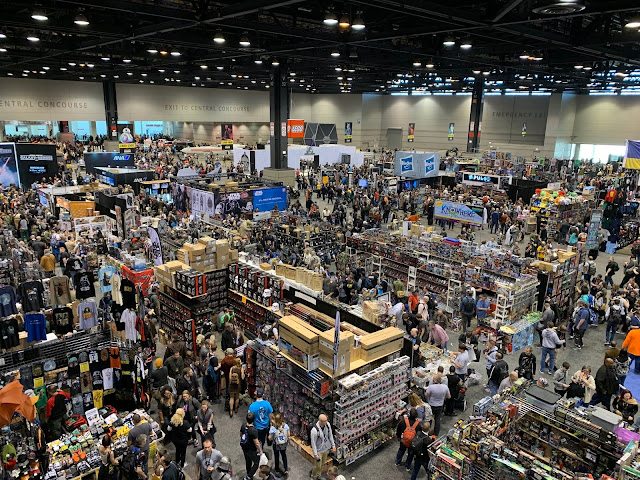 Over the course of the show, the club booth had a wide variety of visitors ranging from fellow vintage collecting enthusiasts and nostalgic cosplayers who grew up with the toys to the newest generation of young fans having seen and enjoyed them for the first time.

A key component of any Star Wars Celebration is the SWCA's Archive Party thrown on the opening night. This year, a number of CAVSWCC members (in partnership with several other great collecting clubs) were involved in making the event the incredible success that it was, with all of the proceeds raised donated to the West Suburban Humane Society.

One of the highlights of the entire convention was a scene that unfolded at the club booth on Saturday. Original club founder and Rochester NY's own Skye Paine (seen below as his alter ego, time-traveling superfan Jasper Nixon) had acquired a rare plush Chewbacca display FULL of stuffed Chewies that had remained unkempt for over 40 years. 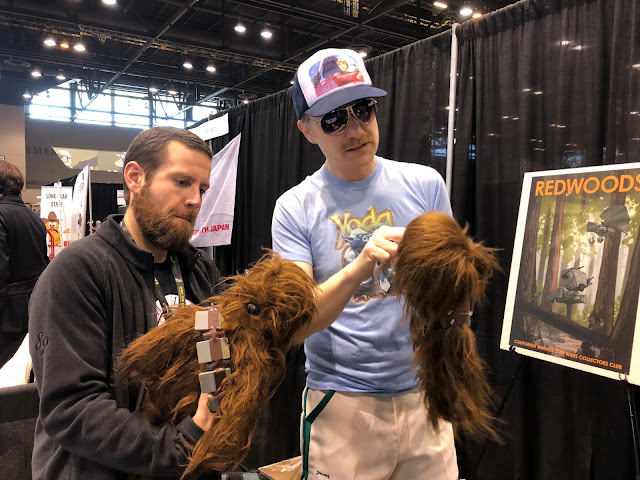 Prior to getting the display encased in acrylic by Collector Archive Services (CAS), a group of us partook in an intense Wookiee grooming session. 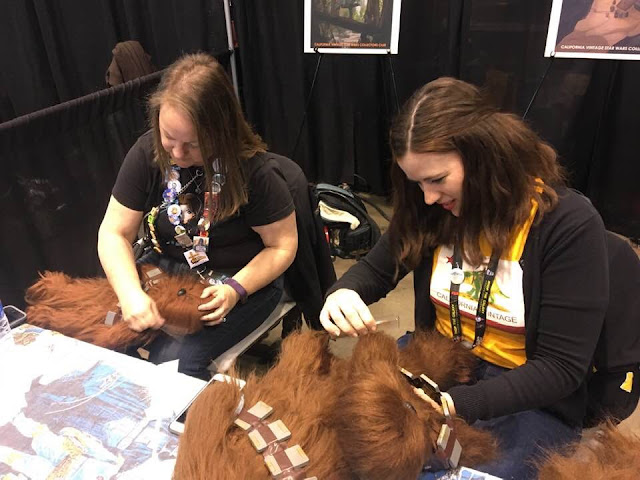 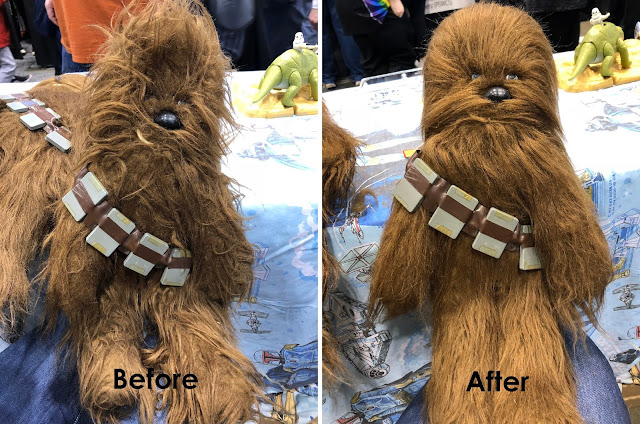 As you can see, the results were incredible (Tessa was particularly masterful with the comb). Wookies [sic] indeed need love too.

Below are a few more group shots of the booth, though a few members who attended aren't pictured.


Thanks so much to everyone for making Chicago the amazing Celebration that it was. Anaheim 2020, here we come!
Posted by CAVSWCC at 10:24 PM 1 comment: 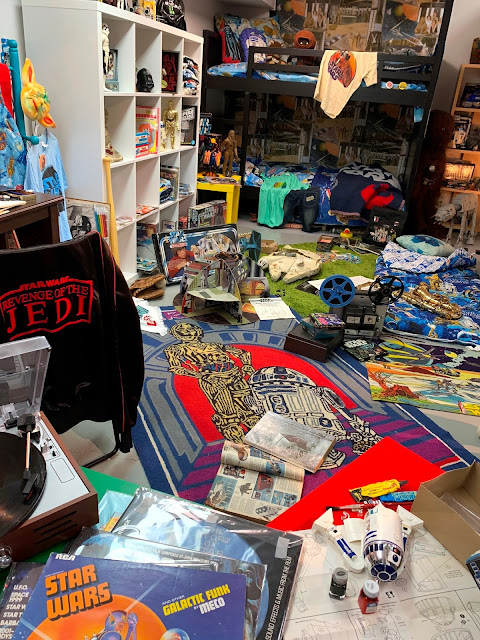 The club's 10th Anniversary celebration continued this past Saturday with our third group outing to Steve Sansweet's Rancho Obi-Wan. Our very own Dwayne Smith, whose first CAVSWCC appearance happened to be at the club's inaugural Rancho trip in 2012, has since gone on to become a docent at the museum and he led this year's tour with flying colors with the terrific Marc Morita along for the assist.

The wonderful thing about Rancho Obi-Wan is that no matter how many times you've visited, you're always bound to see something new that captivates you. Below are a few photos highlighting this trip.

Steve Sansweet and Anne stopped by for a nice visit in the art gallery extension of the museum as the tour was wrapping up and we had a great post-tour group dinner at hoppin' McNear's in downtown Petaluma, which is now a tradition of sorts. 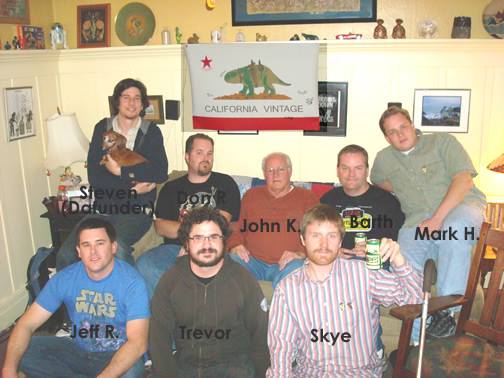 CAVSWCC's second ever meeting (and first in the Bay Area) was held in February, 2009, so this weekend couldn't have been more fitting to commemorate hitting that decade mark. Steven Petsche, who hosted that '09 get-together in San Francisco, was one of several in attendance from the original NorCal meeting who have joined in for the club's past pilgrimages to Rancho, along with Mark Huber and Trevor Wencl. Happy 10 years, guys! 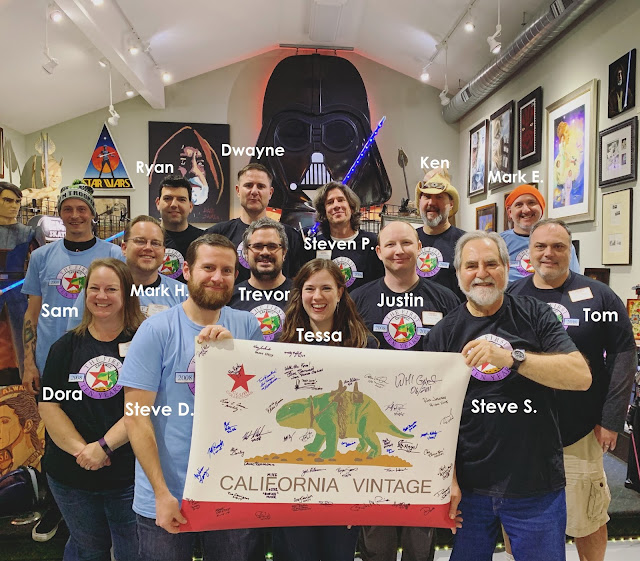 Seeing how many more signatures have adorned the flag since then is a great feeling, as is sharing in the experience that this amazing place offers us as collectors and friends.

--Steve Danley
Posted by CAVSWCC at 12:06 PM No comments: